A new study shows UK banks have lent around £29.3bn more to businesses over the past year. This compares with a 5.3% jump in lending in the EU on average. UK bank lending also surpassed Germany (7%) and Spain (3%).

UK banks have managed to increase lending by 8% since the start of the Covid-19 pandemic to help businesses survive – outpacing the performance of EU countries, a new study by UHY Hacker Young has revealed.

The eight major EU economies in UHY’s study are lagging behind, only increasing lending by an average of 5.3% last year.

UHY’s study of 24 major economies shows banks in the UK added $40.4 billion in new loans to businesses in the last twelve months alone. Banks and governments have flooded lending markets with money to help businesses through pandemic disruption.

UHY’s study found that banks in the UK increased lending at a significantly higher rate than a number of other major economies such as Germany (7%) and Spain (3%).

Growth in bank lending has been primarily driven by UK’s guaranteed Covid loan schemes, which have alone provided over £70 billion in credit to businesses since March.

The Chancellor launched four schemes aimed at helping SMEs who have suffered a reduction in income during the pandemic, including the Coronavirus Business Interruption Loans Scheme (CBILS) and Bounce Back Loan Scheme (BBLS). State-backed loans have given many businesses confidence to access this extra cash without having to make immediate repayments.

The Treasury has extended CBILS and BBLS to March 31 as lockdown restrictions continue and many businesses continue to experience little or no revenue. In the March Budget, the Chancellor announced a new longer-term state-backed recovery loan package worth £65 billion will be launched in April to give sustained financial support to SMEs.

Robert Kidson, Managing Director of UHY Hacker Young Corporate Finance, said “The Government acted phenomenally quickly to launch programmes to support businesses. These loans have served as a lifeline, helping to prevent a wave of insolvencies.”

“We may have underperformed in some areas in our response to Covid but in terms of getting finance to businesses this is an area where the UK has been a leader.”

“The economic impact of the pandemic and the disruption to businesses cash flows has lasted longer than anyone expected. The vaccine rollout provides a light at the end of the tunnel. But there is little certainty on when businesses can return to ‘normal’ operating levels, the UK needs to provide as much support as possible to ensure businesses stay afloat until then.”

“It’s clear the likes of CBILS and BBLS can’t go on forever but the Government needs to ensure that their new replacement scheme offers some level of protection to businesses. Businesses would prefer that personal guarantees on these loans are imposed sparingly as they place a huge burden on business owners.”

Outstanding lending to businesses across the ten biggest global economies hit a total of $32.7trillion last year, an increase of $3.1trillion (10.5%), compared to $29.6trillion of outstanding loans a year earlier. 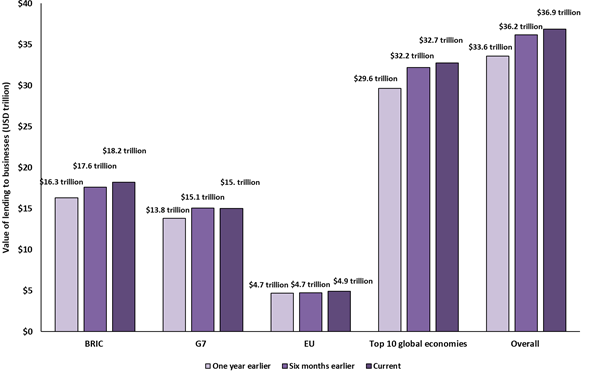 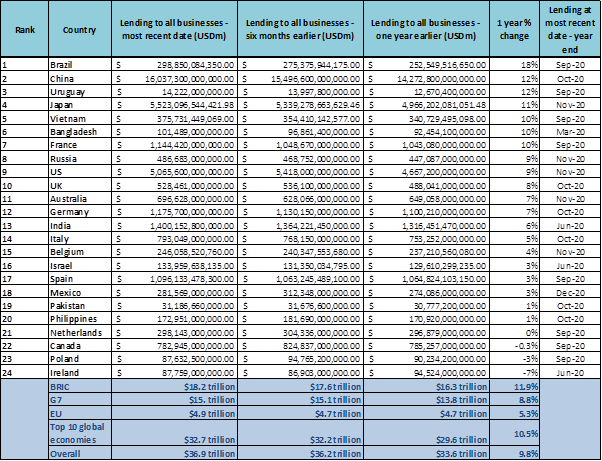 Over two thirds of all APP fraud starts online