Interest only mortgage stock falls by 15%

New research by UK Finance has found that the stock of outstanding interest-only mortgages fell by 15 per cent in 2021, compared with the position at the end of 2020. The concerted industry strategy to manage down the size and risk profile of the interest-only book has seen it reduce by over two thirds since 2012, when we first started collecting these data.

Back in 2012, with 3.2 million interest-only mortgages outstanding, the risk that customers could reach the end of their term without the means to repay posed a significant industry risk, albeit a hypothetical one given there had been no material evidence of such end-of-term defaults to date.

Since 2014, the lending rules put in place by the Financial Conduct Authority (FCA) mean that new interest-only lending, while still permitted, accounts for only a small minority of activity. Just 32,000 interest-only loans were advanced in in 2021 – less than three per cent of total lending.

At the same time, the industry has undertaken a collaborative communications programme, reaching out to all interest-only customers to discuss repayment plans and make sure they are on track to repay. This programme, continually reviewed and refined by lenders, has created an ongoing dialogue and helped minimise any repayment risk.

As a result of these concerted efforts, by the end of 2021 there were just 754,000 pure interest-only mortgages outstanding in the UK, and a further 252,000 on part interest-only, part repayment terms, reductions of 17 and nine per cent respectively compared with 2020.

This continues an uninterrupted downwards trend in the interest-only book size seen over the past ten years, with the reductions well ahead of the maturity schedule. In addition to the 1.1 million interest-only loans that have matured on or ahead of schedule between 2012 and 2021, there are also more than a million fewer interest-only mortgages still yet to mature than there were in 2012. The closest maturities – those set to mature over the next two years -are now only around a third of the number they were in 2012. Even those set to expire over a decade from now have reduced by one third.

This accelerated volume of redemptions has been greatly helped by the industry’s communication programme. Even where borrowers do not respond directly, the contact will have nonetheless prompted many customers to look at their situation and take action if required.

Some borrowers will have redeemed in full, which is most likely for the earliest maturities where the balances are relatively small. Others will have remortgaged onto full or part repayment terms or, for some older interest-only customers where this is the most suitable option, onto a lifetime or retirement interest-only mortgage (neither of which are included in these figures).

In addition to the reduction in numbers, the risk profile of the outstanding stock of interest-only mortgages has also continued to improve. Helped in part by a year of strong price growth (around ten per cent according to the Nationwide index), the typical LTV on outstanding interest only mortgages has fallen. With this, the risk to borrowers and lenders has also been reduced should repayment be an issue. In particular, there are now only 51,000 pure interest-only mortgages outstanding at over 75 per cent LTV, down 41 per cent from the number just one year ago, and 94 per cent fewer than the 900,000 at these higher LTVs in 2012.

Although these improvements remain a good news story, there are still one million interest-only loans outstanding, and the communications programme will remain in place as this stock is managed down to the final maturities in the 2030s.

Notwithstanding the ongoing improvements, a small number of interest-only mortgages do not repay immediately on maturity in each year. However, our data indicate that most of these do in fact repay shortly after, most commonly within six months, and only a small number need longer or require tailored assistance. Where this is the case, lenders have a range of options to repay that can be explored with the customer.

Overall, the interest only stock looks in good shape to continue on the path it has followed for the past ten years, with borrowers repaying their mortgages on time or before. However, for those customers who are unsure whether they will be able to repay, it is vital that they contact their lenders at the earliest opportunity, so that they can explore the best options to repay at an early stage.

Number of residential interest-only mortgages outstanding by maturity date, position at end of 2012 and 2021 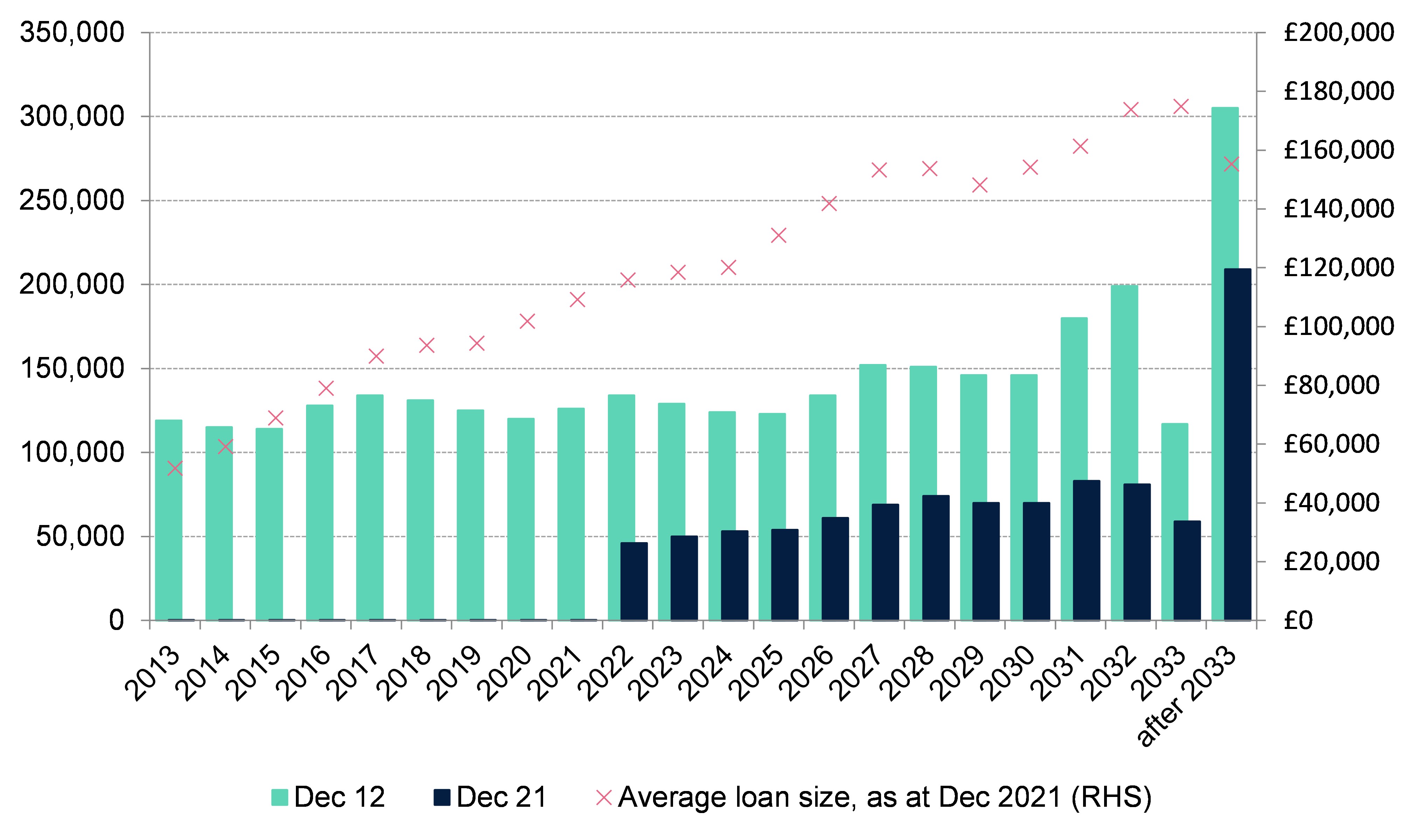