The Institute of Directors (IoD)’ Economic Confidence Index, which measures business leader optimism in prospects for the UK economy, remained very low in April 2022, at -36. In March 2022, the Index had collapsed to -34 from its previous level of just below zero.

However, confidence in prospects for their own firms partially recovered in April from March’s low as business leaders came to terms with the impact of the Ukraine war on their own organisations.

Kitty Ussher, Chief Economist at the Institute of Directors, said “The invasion of Ukraine sent shockwaves around British boardrooms as firms grappled with the impact on their own organisations and those of their trading counterparties. One month on, our data shows many businesses are able to start planning for the future again, with a partial recovery in investment intentions and confidence in their own firm’s future.

“However, optimism in the UK economy itself remains very low, and is now the number one issue seen as having a negative impact on businesses, even above the other very real pressures of high energy costs, difficulties in the labour market and problems with international supply chains. Business leaders see no early prospect of an improvement in inflation and the overriding mood is one of heightened risk and uncertainty.”

The Directors’ Economic Confidence Index measures the net positive answers from its members to the question ‘How optimistic are you about the wider UK economy over the next 12 months?’ on a five-point scale from ‘very optimistic’ to ‘very pessimistic’.

New data points will continue to be made available on the first day of each month containing data obtained from a survey of IoD members that is in the field during the previous month. 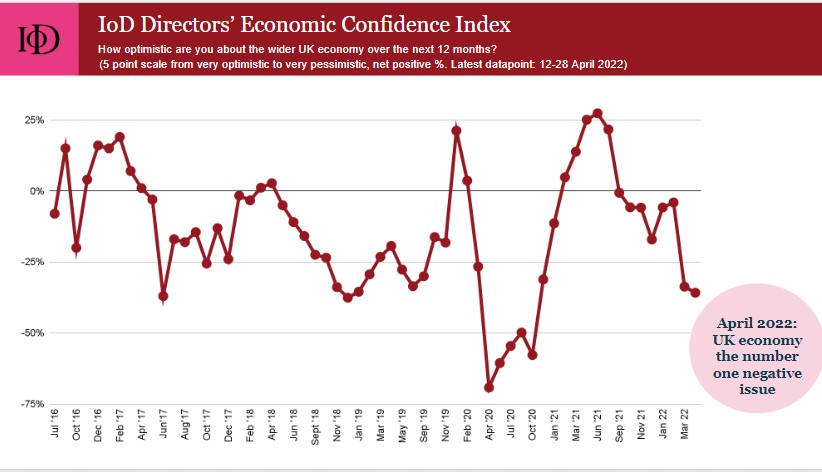